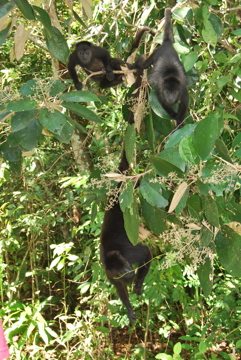 On our way to Hopkins from the airport in Belize City, we stopped at the Baboon Sanctuary in the small town of Burrel Boom.  The Belizeans call the indigenous Howler Monkeys "Baboons".  There is an area of protected land where conservationists and residents cooperate to create a wonderful habitat for the Howlers.  Residents allow the trees and vegetation to grow so the Howlers have plenty to eat.  Our guide, Robert showed us where a family of Baboons were feeding and the mother and two babies came down from the trees to eat bananas from his palm.  The mother had her hands on Mary's head in eager anticipation of the treat.  The father was very upset and howled severely until I finally told everyone to move out. 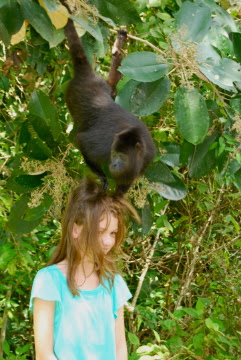 The tree cutter ants are amazing.  They are much bigger than our ants in the states.  They travel in large groups transporting leaves from plants in the jungle to their hill.  They spit on the leaves and a fungus grows provided them a source of food.  The males have huge fangs which can be used as stitches when people get a cut in the jungle.  They create huge trails when they are foraging through the jungle.  We tried not to step in the trails. 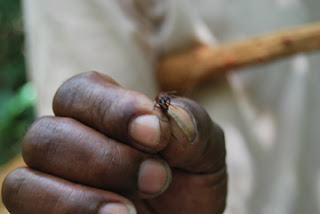 The cashew plant is used to make cashews like the ones we eat at home.  They make wine from the fruit of the cashew tree.  It is heard to be very strong in alcohol content.  The picture below is a lovely cashew tree with people relaxing under it's shade. 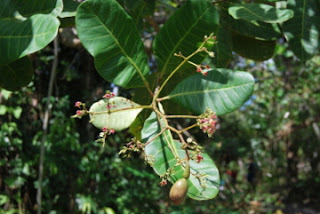 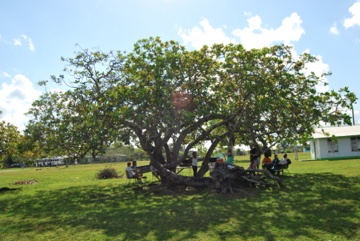 While we were on the tour, a local boy did some dirt bike stunts.  He was so cute that I couldn't resist taking his picture.  The Belizeans are very friendly and warm people.  The official language is English, but many speak Creole and Spanish. 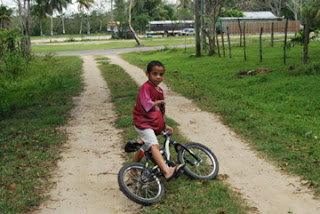 We finally arrived at Almond Beach in Hopkins.  This is a beautiful Spanish style property with clay tile roofs and mahogany interiors.  Upon arrival to our room, we found these swans made of towels and fresh flowers on our bed as well as on the kid's bunkbeds. More pics of the property to come. 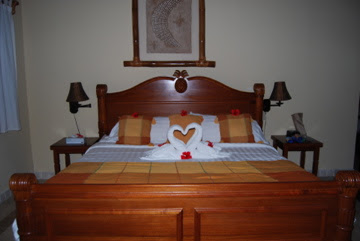