Today we met our tour guide Omar Deras at the entrance to St. Herman's Cave in the Blue Hole National Park.  St. Herman's Cave is of great archaeological interest. It was used by the Maya during the Classic Period up to 2,000 years ago.  The ancient Maya believed that caves, particularly those with rivers flowing through and out of them, were entrances to the underworld, Xibalba.  We saw remains of pottery vessels which were used for the collection of Zuh uy Ha (virgin water) from driping speleothems, actively growing stalactites.  There were also charred remains of pots which were used to catch and burn blood sacrifices to the rain god Chaak during droughts.  The blood was collected during bloodletting ceremonies in which priests and elders would pierce their tongues or foreskins.  No evidence of human sacrifice has been found in this cave, unlike some others in Belize and Guatemala.  All of the pottery pieces found in the cave have been shards, since the ancient Mayans believe that it was necessary to smash sacrificial vessels to release the spirits within.  All those items are now studied by the Department of Archaeology in Belmopan.  This cave system has been carved out of limestone by the Sibun River. 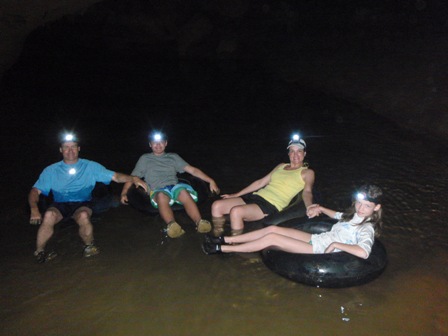 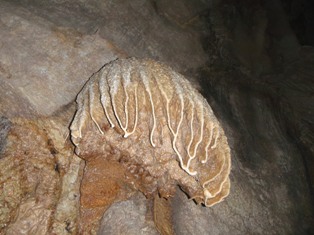 We hiked up the cave, looking at the various formations and artifacts, then drifted slowly down the river for about an hour.  We didn't see or hear another soul for the entire tubing trip.  We then hiked back up through the river to the entrance.  We completely lost track of time and space for the 2 1/2 hour expedition.  It was a jolt emerging into the tropical sunlight after so long underground. 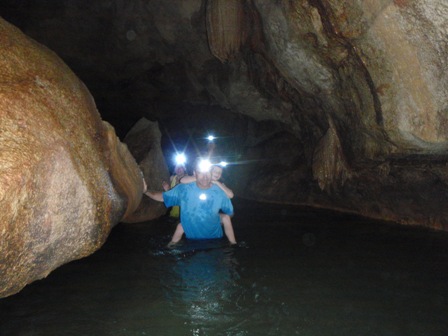 We saw a few cave-dwelling animals during the trip, such as this short-tailed bat.  There were several species of bat flying throughout the cave during out trip.  They roost in holes, or "pots" in the ceiling carved out by their acidic urine eroding the limestone.  There was a large, active colony of cave swallows at the entrance to the cave.  There were also many camel crickets as well as their main predator, scorpion spiders or whip spiders, which are actually not spiders, but arachnids closely related to scorpions, but without the stinger.  They are harmless, despite their fierce appearance, and Omar even picked a large one up to demonstrate.  Mary was not amused. 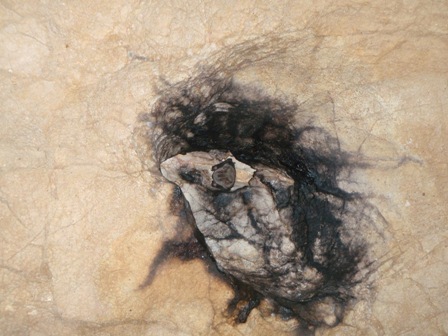 After the tubing trip we stopped by the inland Blue Hole for a quick swim.  The Blue Hole (not to be confused with the much large and deeper oceanic Blue Hole located int the barrier reef), is a formation where the river upwells into a limestone sinkhole, then travels as a daylight river for a hundred feet or so, then dives back down into another cave system.  The hole itself is about twenty five feet deep and crystal clear.  Our visit coincided with a huge group of army ants, which livened things up.  Despite their large numbers they were very orderly, so it wasn't too difficult to step over their trails.  John learned that they have painful stings when he decided that it would be a good idea to flick them into the Blue Hole for the waiting tilapia to snap up.  They found a red-rumped tarantula with an egg sac and forced her out of her hole.  She was still struggling to escape when we left.  It was the only time I've ever felt sorry for a spider.  The highlight of the stop was a large purple-crowned fairy hummingbird taking a bath in the river just below the Hole.  The emerald, white and black hummingbird repeatedly hovered right at the river surface and buzzed in the water, their form of bathing.  She then perched on a branch and preened herself.
Posted by Unknown at 7:25 AM